The Death Merchants are back on the attack! 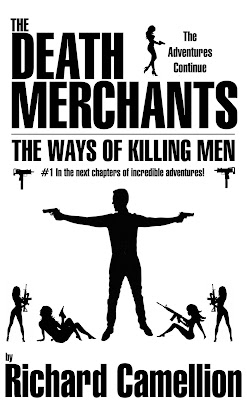 Brand new release!
Available now for Kindle and in print.

The Death Merchants: The Ways of Killing Men!
Book #1 in the new series of the exploits of the Masters of Death, destruction and Disguise!
by Richard Camellion

The next mission is the most deadly ever faced, and the Death Merchant is seething that the CIA has forced him back into their service!  He'll save their bacon one more time - before he serves them breakfast in Hell!

As the adventure opens the Death Merchant team must fight their way through the streets of Washington DC in the bloodiest and deadliest battle on civilian streets in the Death Merchant's violent career.  The body count will be epic - or his team will be gathered into the arms of the Cosmic Lord of Death!

If they are to survive, outnumbered and outgunned by the enemy, the police and the military they will have to work together as a savage and remorseless team - The Death Merchants!

And the adventures continue...