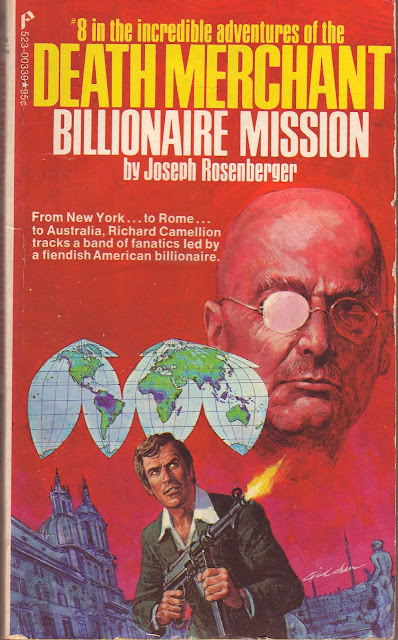 Cleveland Winston Silvestter is not just an ordinary nut.  He is a business genius, a billionaire whose interests include international oil and numerous manufacturing enterprises.

He is also a fervent spiritualist who has tried for years to make contact with Lucifer, whom he is convinced is the real God of this world and the next.Cleveland Winston Silvestter appoints himself Lucifer's ambassador, with the full title of Ambassador of Emperor Lucifuge Rofocale.  His mission is to destroy the world - eliminate civilization!  No one will be spared but the ambassador and his followers, the 200 members of New Dawn, who will be safe in an underground city built on a giant ranch in Australia.  He plans to annihilate mankind by triggering an all-out nuclear war.  Then Lucifer can take over.

First, the Israeli premier is killed by a bomb.  The Egyptians are blamed, of course.  Next an attempt is made on the life of the French premier.  This time the Israelis are suspected.

Fidel Castro is almost assassinated.  Who else but the Americans would do such a thing?

The two superpowers confer.  They've been watching Silvestter for a long time but have been unable to stop him.  Proof is needed, and there is only one man capable of smashing the fiendish scheme before it's too late - another ambassador of annihilation, a man who, like Satan himself, is a master of disguise and deception.

The Death Merchant and the Devil are hell-bent on a collision course!