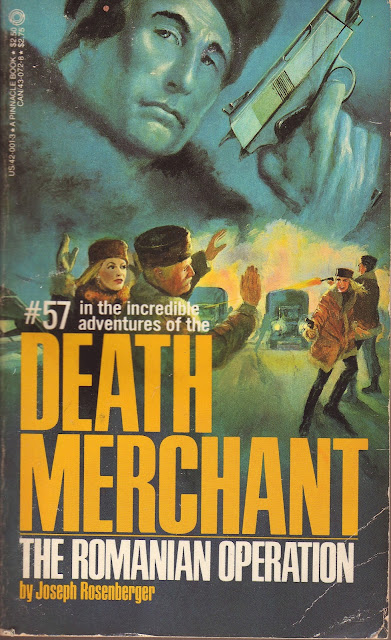 The breathtaking but treacherous mountains of Romania become a deadly arena of intrigue.  RSBK head, General Ion Gheorghe Constantriescu, wants to defect to the United States, and only the Death Merchant can get him out of the isolated Soviet bloc country.  Two minor obstacles, however:  Constantriescu will only leave Romania with his wife, a fiercely loyal Russian KGB agent assigned to spy on her husband.  And the General's organization is doing its damndest to capture the Death Merchant.


Chances for success are extremely slim, like "trying to get the toothpaste back into the tube", as Camellion assesses the situation.  But with a little help from a handful of Romanian freedom fighters, a monastery of Jesuit priests, a top-secret aircraft, and a deadly arsenal of weapons, the master of cunning and disguise plots an extraordinary kidnapping and escape.