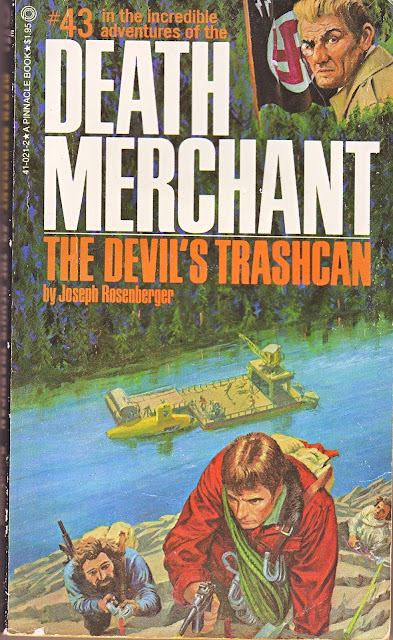 FACT: The Devil's Trashcan is the nickname of Lake Toplitz in the Dead Mountains of Austria.  At the end of World War II, eyewitnesses observed the SS dumping metal cases and boxes into the lake - boxes filled with Nazi secrets that today could expose world leaders as former Nazi collaborators.  People have been searching for those secrets ever since.  Most of the people are dead.


When the CIA and the BND - West German Intelligence - attempt to lure ODESSA, the worldwide organization of ex-SS men, into the open, they use the Death Merchant as a decoy.

Richard Camellion is placed in charge of the "Cologne Historical Society" expedition that will probe the depths of the deadly lake with modern underwater devices.  Camellion knows ODESSA will sink to any level to protect the Nazi secrets buried in the mud.  Will Camellion be able to swim out alive or end up as just another dead duck?