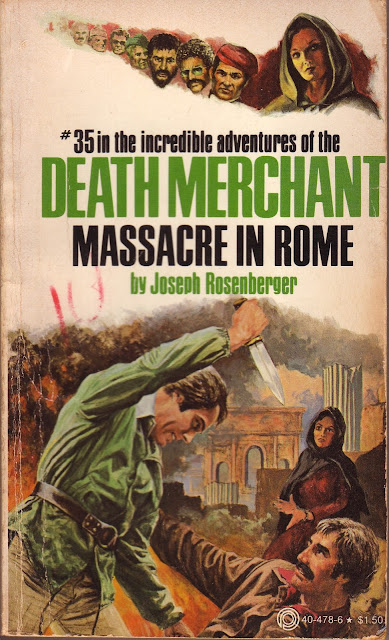 Normally, the CIA pays little attention to mystics and other exponents of the psychic arts.  But Maria Gondozatti, a simple woman living in Rome, has been making predictions about world events that have turned out to be frighteningly accurate.  Where, and how, does she get her information?  The CIA Office of Science & Technology refuses to believe the answer lies in the supernatural, and plan to have one of their "front" organizations investigate her.  But before their parapsychologists can get to Rome, the Red Brigade revolutionaries kidnap her.


One man knows where the Red Brigade is hiding her, but he's a triple agent selling information to the highest bidder.  The CIA has got to find Gondozatti first, and strike out against the Red Brigade at the same time.
Richard Camellion is the only man for the job.  The Death Merchant's orders: Find Maria Gondozatti, and settle the Red Brigade's hash once and for all - at any cost!