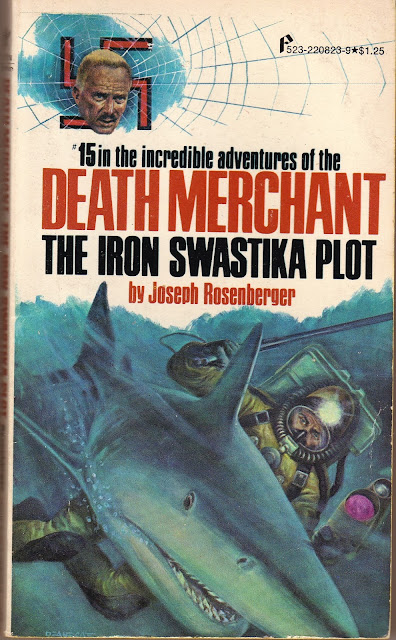 Die Spinne.  German for The Spider.  A deadly network of fanatic ex-Nazis.  Ever since the final defeat of Germany in 1945, Spider agents have been at work building their secret organization.  A vital part of their mission has been to secure the treasures and monies accumulated by Hitler's hierarchy, and hidden in all corners of the world.

The Spider is now attempting to snatch a huge treasure in gold - $2 billion worth - from the Atlantic waters off Argentina.  Only four men are known to have the exact location.  One is dead.  A second has disappeared.

A meeting in Vienna with one of the two survivors.  Maria-Theresian Plaza.  A beautiful park, as only the Austrians could design it.  Gay, green, and full of sunshine and life.  Until the Death Merchant and six Spider agents turn it into a bullet-spattered slaughter ground.
Only one man would walk away...with a last clue.

Would the Spider be waiting?