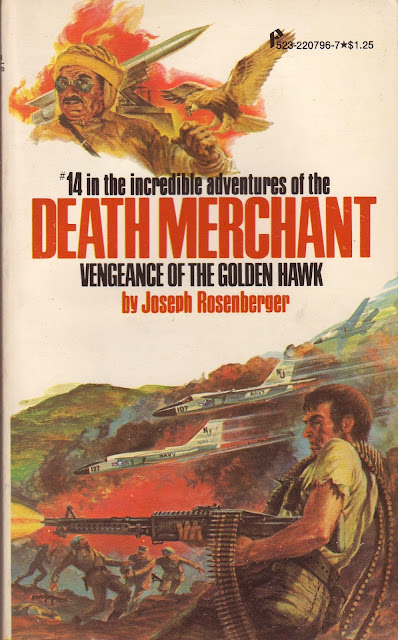 The strange initials stand for Vengeance of the Golden Hawk, an Arab terrorist organization dedicated to the furtherance of the Palestinian cause...and the elimination of Israel.

Assassination, skyjacking, letterbombing, and every possible terrorist activity has been used by the VGH.  The Israelis have been repeatedly hit by the fanatical campaign, and have been unable to penetrate the terrorist camp.

Now the VGH is assembling a rocket with an atomic warhead, and plans to unleash the murderous weapon on Tel Aviv.  The rocket will kill every person in the city, and flatten the area into a pile of radioactive rubble.  It is only a question of time.

And Richard Camellion, The Death Merchant, makes his very first move...into a Jordanian prison!  His CIA contact in Amman is murdered.  It is to be Camellion's wildest and most incredible race against time and disaster.

Can one man possibly succeed where nations and armies have failed?